Achievement of students of CSE Department


A team of 4th year 2nd semester students of the Department of CSE has won the 2nd Prize in EATL-Prothom Alo Apps Competition 2014. Honorable Finance Minister of the People's Republic of Bangladesh has handed over a cheque of the prize money (BDT Five Lakh) to the winning team as the chief guest of the colorful awarding ceremony after the Grand Finale arranged at the hotel Sonargaon on Thursday, 27 March 2014. The team named Lazy Coders has to contest with more than 800 teams from 85 universities of the country. They competed with a project named Ludo which is an Android based mobile application version of the popular indigenous game with the same name. The team members are Mohammad Arman, Anik Saha, Moinul Hasan Shuvro and Ashif Mujtoba. 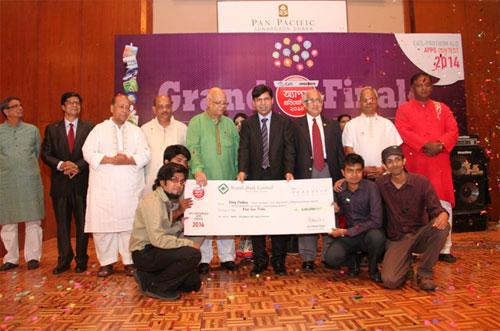 Department of Computer Science and Engineering